One my most enjoyable, but frustrating, experiences is putting up a building. I have built a half dozen buildings and each was a unique challenge. Two of them were full houses, and four were small buildings, with most of those in the 12’ by 20’ range.
I started building in 1977 after I took evening classes down to Bath (ME) once a week for several months at the Shelter Institute. When the basics were done my wife Marcia and I enrolled in their design class, where we took the principles of heating, snow loads, foundation systems, site orientation, beam forces and moments, and drew up our own plans. With detailed floor and wall plans and materials lists we built our house 1,200 square foot home on a 5 acre plot of land on the 430 foot contour line on Moody Mountain facing south. We’re still married and in the same house!

The post and beam frame of our house was harvested off our land. I was young and foolish enough to cut several dozen large oak trees by myself, and now consider it a miracle that I didn’t slice and dice a leg or have a tree fall on me. A case of beer was all it took to pay my neighbor Alan Davis to fire up his old John Deere tractor and haul the logs up to the road where they were picked up by Basil Pearse and trucked to his custom mill in Searsmont.

A couple of weeks later a massive pile of extremely heavy green and wet oak beams were dumped back roadside for the price of $140. That’s for sawing and trucking. The biggest timbers were 6 x 8 inches by 20 feet long. The rest is history. We are still here, with our lives were permanently simplified by that unforgettable quote from Pat Hennin of Shelter Institute, “ People who build small houses can afford to relax.”

My best friend in Maine is Lock, who worked with me all during that summer. We crafted under the direction of Jay Leach, a real carpenter who was experienced with traditional post and beam construction. Jay knew when we had to find chains and a come-a-long to draw the frame together as tight as possible before we sunk short lengths of rebar into the 1/2 inch holes we bored into the tops of the oak posts. Jay shared everything we needed to know for the job to turn out great.
The next summer I worked with Lock, who built his own post and beam house way up on Appleton Ridge.

I’m sitting here this morning appreciating my hammer and nail relationship with Lock. We’re back at working together ! Lock came over to my camp from Augusta to help me tighten up the new hut I am finishing up on Hobbs Pond. As the rain and the wind pound down this dark cold morning (It is 36 degrees out) I’m thankful for Lock’s friendship and help yesterday.

I received this announcement from Rosy Geary, and plan to be there for this most interesting hike.   I’ve done the hike before and was stunned by the  whole deal.

” Well it’s that time of year again, Yes, the annual hike up to the Millerite Cliffs!

It all begins this coming Monday morning Oct. 22nd 7:00 AM meet at upper end of Maiden’s cliff road off Youngtown Road.

We been doing this for twenty five years plus to commemorate the yearly anniversary of the Great Disappointment of Oct 22, 1844

Hear a summary of what happen on that strange day!

Enjoy meeting new people from all around the area, good exercise, and stories!

It’ takes about an hour to go up and your on your own coming down, no climbing or ropes, just hiking!

stay as long as you like,… dogs welcome on leash only,… for safety!

This has turned out to be a rain or shine event come prepared!

via The Allure of the Long Distance Trail – Thursday, October 11th at 7:00 – Bremen Library

We started the day with a promising sunrise, followed by fresh omlettes stuffed with tasty hen-of-the-woods mushrooms that Ivan had gathered the at hometo bring here. Also nown as maitake, it is is a mushroom that grows in clusters at the base of trees, particularly oaks.

A couple of events dominated today’s activities. First, we were able given permission to view the interior of Indian Camp between 9 and 10 am when the cabin was vacant between guests where the following photos of the interior  were taken:

The following information is from “The People, The Logging, The Camps : A Local History” by Bill Geller (May 2015): One of the small cabins that is available to rent here is known as Indian Camp, perched right on the shore. Dating from the 1890’s, someone at the time intricately decorated the camp’s interior walls and ceilings with birch bark shapes. The birch bark artist is unknown but it’s something that history has lost even in that relatively short amount of time and no one really knows who did. Two two tales persist. One claims that the person living in there acquired an artistic native American wife. Others believe that an artist brought his wife to stay at the camps for health reasons and that he decorated the inside when he was not painting. Another aspect of the tale is that the owner’s grandson discovered birches on the hillside Southwest of the outlet with old cut out bark-shapes matching those in camp. Some also believe that President Theodore Roosevelt stayed at the old Indian Camp somewhere between 1905 in 1909, visiting his Indian mistress. Take your pick of one or maybe all the stories are true!

Carey Kish’s new Maine Mountain Guide lists the major hiking trails the accessed from DLC, with routes depicted on Map 2 – Maine Woods, contained in the back flap of the book.  (Yesterday’s 2 mile loop up and along the cliffs near the camp is not in the book, but should be, as there are fine view of both Katahdin and the Southwest landscape from the ledges on top.)

We completed the Eastern half of the Debsconeag Lake Trail, hiking counter-clockwise and visiting Fifth Debonskeag Lake, Stink Pond, Seventh DL, Sixth DL, and then returned to our camp at Fourth DL. It took us 6 hours to walk the 10.5 miles, including a couple of side trails and an added 0.8 miles due to a wrong turn getting to Fourth Deb. Lake. While the trails here are brightly blazed and those markings are frequent, they are all blue-blazed and there are sometimes unsigned intersections where people like me make mistakes.

Here are some photos taken on that loop hike.  While the colors of the foliage have intensified there are still a number of deciduous tress that have not yet shown their true colors. 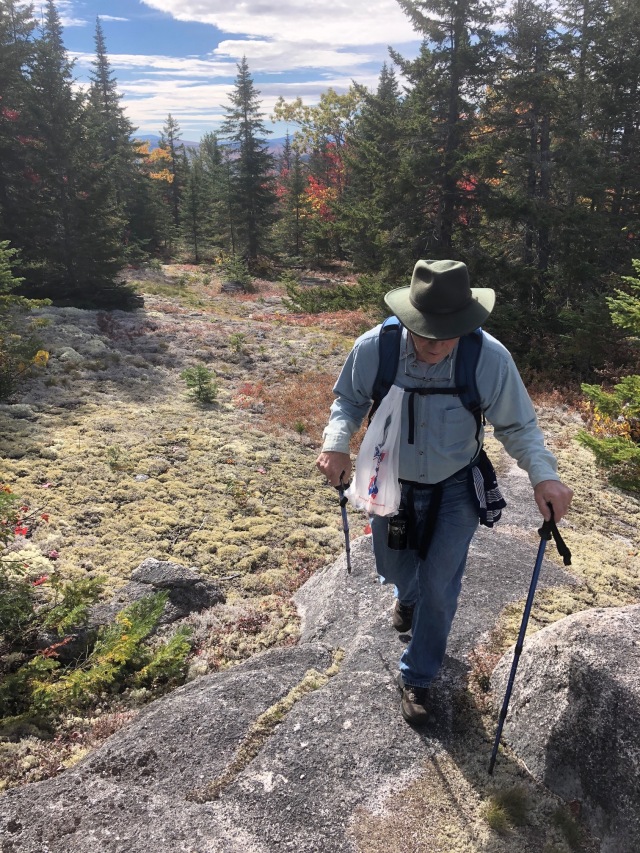 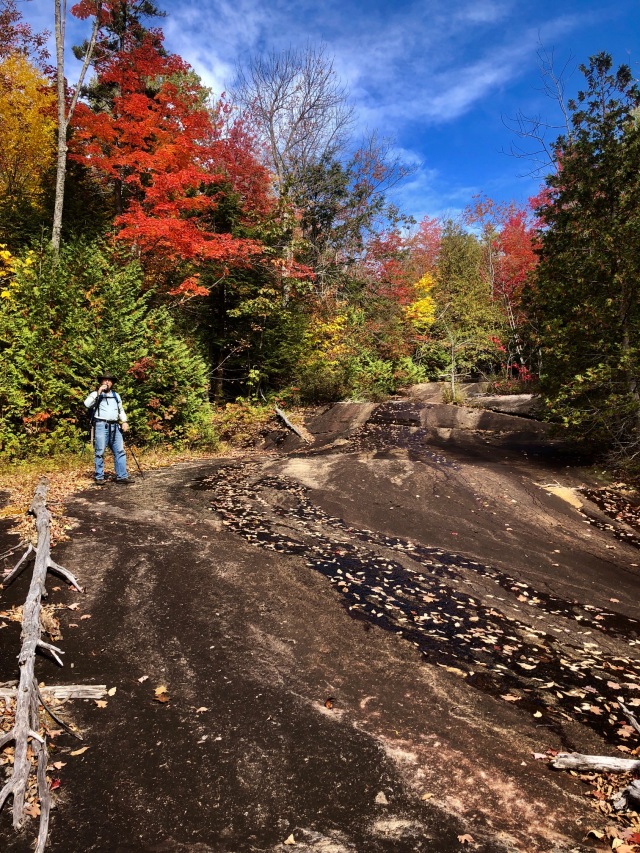 When Ivan and I get together in the Maine woods, we soon revert to mushroom hunting mode, especially in the Fall a few days after a hard rain. We had a very good day yesterday, harvesting two small edible and choice toothed hedgehogs, and a mess of freshly popped oyster mushrooms.

They will be cooked in butter and seasoned for sampling for dinner tonight.

Some background from the Bureau of Parks and Lands Nahmakanta Public Lands Guide and Maps : Debsconeag Lake Camp are within the Namahkhanta Public Lands, encompassing 46,271 acres of forest and low mountains, punctuated by numerous streams and brooks descending from higher elevations that flowing to the numerous lakes and ponds in the area. The area is at the far end of the 100 Mile Wilderness sectino of the Appalachian Trail. 24 of these bodies of water are characterized as “great ponds” which are 10 or more acres in size. Within the Namahkanta Public Lands is the state’s largest ecological reserve, an 11,800 acre expanse that includes the Debonskeag Backcountry.

I’m a big fan of old Maine sporting camps. The state is full of them still, leftovers from the post logging period where former settlements that housed the little armies of men who worked in the woods were converted to establishments that catered to upper class men and women who wanted to hunt and fish under the wings of Maine Guides. I’ve stayed in places from the Maine/Quebec border all the way down to the Midcoast area, where I bought one of my own tiny camps 11 years ago, on Hobbs Pond, in the town of Hope, just a 10 minute drive from our house.

When Marcia and I had a young family, we started a tradition of spending Columbus Day weekends at Baxter State Park, initially camping in their three-sided lean-tos, until we spent a early October weekend in snow and ice. Fording Wassataquoik Stream when the shores were frozen is painful. Enter our discovery of the Baxter bunkhouses- true winter setups, complete with wood stoves and tighter quarters. Those were larger events that included friends with family, as we learned to reserve the whole bunkhouses for our October adventures.
Times changed and I got into winter camping, favoring traditional foot travel on lakes, rivers and streams. I still do that, hauling ample gear on a long narrow toboggan, even lashing a canvas tent with wood stove and stove pipe to warm the body when it is well below freezing outside. In Jackman, I sampled Chet’s traditional cabins before venturing out for longer forays on Attean Pond and the Moose River.

Marcia and I are sharing it with our friends Lynn and Ivan. We came in yesterday and they are joining us today.  You get here by heading directly north from our home in Midcoast Maine for a few hours, winding your way through faded little hometowns, and sparsely settled back country until you veer off pavement just past Brownville Junction to hit the gravel Jo-Mary Road, a relatively solid dirt highway of sorts that meanders some 25 miles through working forest until the road peters out approaching the Debnonskeag Lake Camps.

We unloaded our gear to a small dock where we were picked up in a motorized wooden freight canoe that transported us a half mile up the Lake to the camp itself.
Leslie is our host here, an Amazonian descendant if I ever saw one. She radiated capability, friendliness and girl power. She was strong enough to heft a fully loaded vintage steel Coleman cooler up to her shoulder as she moved quickly along the very uneven twisting path to deposit our cooler on the floor of the cabin.
I’m usually too busy to relax much of the day, but after we unpacked here I slid into alpha brain wave mode easily when I rocked in the hammock for a while after I started a campfire on the shore of the lake outside our camp.

It rained lightly of and on on the whole time that a grilled hot dogs over the wood coals. I don’t eat hotdogs much but enjoy them and even thick slices of Spam when they are grilled to perfection over hardwood coals. On toasted buttered rolls, appointed with fresh mustard, relish, and a healthy dab of my homemade kimchi, our first supper was just right on this Fall weekend night.
Then some reading and writing in the main room of the cabin, around the big Vermont Castings vigilant wood stove that we didn’t need to light tonight. Although this cabin is tight enough, it is more than 100 years old, and has weathered through so much water and wind and flying debris that I consider living in it for a few days is a rare privilege.