I’m reblogging a “report” of what appears to have taken considerable time and has good data. I was surprised that the completion numbers were this low, and like the concept of the composite “typical hiker”.  This is interesting for any long distance hiker.

Andy and I were fortunate to escape from the trail this afternoon without broken hips or concussions.  Ice, ice, baby.  Ice that has been present for a couple of weeks had just received a faint dusting of dry snow, which lubricated the surface, hiding the worst ice flows and skidding one sideways on slopes.

Packing a saw and a small axe,  the was plan was to hit the snowmobile trail from here on High Street over to Moody Pond, where we’d clear any remaining blockage from trees that had bent or even fallen down due to the weight of the ice on the limbs.

It wasn’t very long until we were in trouble.  I am not going to publicize exactly what event occurred in the first two minutes of riding due to fear of significant others ( i.e. wives) likely scrutiny of this entry, and neither do Andy nor I give up on much of what we try to do, but we both were in total agreement we had to get off the trail.

We were riding fat bikes- me the Pugsley, and he his Farley.  We let almost all the air out of our tires to increase the contact patches.  The problem was his lack of studs on his tires.  I was able to grip the ice.  I couldn’t walk without slipping all over the place, but he couldn’t walk or ride. We actually tried to walk the bikes back up the big open field we were moving through but couldn’t get up.  Below us was more descent and then flatter, wooded conditions, which we aimed for.

It was no better on the flat.  After reaching the edges of his land, we cut through the woods and headed back through the field across from his farm.

Still, I was able to ride, and ride anywhere. My bike floated over the untracked snow, which was covered by that lubricated  ice shield that made walking very difficult.

I was instantly transported back to the 10,000+’ snow covered High Sierra, backpacking in California in 2010, where my booted feet were kicking steps through the ice in the hopes of surviving the traverse. 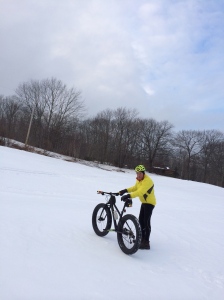 Same thing here, with Andy tracking in my steps.  It took us 45 minutes to walk the little blip near the Start and Finish icons below.

We gathered our senses, congratulated ourselves on making it this far, and looked at our watches.  It was now 3:15 PM. We agreed to stay on back roads and put in some more miles before the riding would get crappy for the next two days, where above-freezing temperatures, and 1-2″ of rain would turn this rock hard surface to a quagmire.

It’s not easy riding the roads with 4 pounds of pressure in your tires, but we made it in before dark, and we agreed to ride again together some time soon and tackle those downed trees.   Maybe Sunday?

I’ve brought into the world one mean  “psychological rhinoceros” in the form of Lincoln Jamrog.

-The New Year brings about new hopes and goals.  Here’s what the Rockies’  Jamrog has in his sights this riding season- the Crusher in the Tushars bike race.

This: -Flahute.com, April 5th, 2011 “This event will truly be a crusher for anyone crazy enough to enter it”

and this:  via A Guide to the Crusher in the Tushars – Grizzly Adam.net.

and then this: West Coast’s Arlo Jamrog calls me after a 65 mile ride out of San Francisco as he trains up for a Century ride ( 100 miles in a day).

Just when I am trying to dial down the suffering quotient for the year, these two ramp it up.

Could these two be expressing the “Polish suffering gene” ?

Sunday morning came and brought back a bunch of Bubbas to ride the wide snowmobile track between Routes 90 and 131 in Warren.  I was overjoyed to get in three rides this week, all on my Pugsley, on trails.

The super hard surface that we encountered on the frosty , single temp New Year’s morning was now looser, and the going was slower.  It was easily twice as much effort to move than was the case on our last time out.

We had an array of bikes and tire sizes taking to the trail today: several fat tire bikes, a few traditionally sized 26″ mountain bikes, and one 29er.  Some tires were studded some not.

The fat bikes did the best, although Eric placed his 29er bike right up there with them-  running Knobby Nics- 2.35″ wide with 7.5 psi in the front a slightly more in the back.   The guys with regular tires on 26″ bikes trailed.

The going was best in the wooded sections, where the shade kept the surface more solid.  Out on the open areas, things got tough for everybody.  The meager sunlight was enough to soften the surface.  Here’s the view back toward  big open area that put most of us into walk-a-bike mode.

Back at the parking lot, Jason’s pressure gauge revealed some surprisingly low readings. The clear low pressure king was Ian, sporting a measly 2.5 PSI in his studded 45N 4″ rear tire. Both Ian and Jason were running tubeless.

During the ride, I let air out of my tires twice.  I though I had gone too low, so I was  surprised that I was running a positively plump 7.5 PSI.  I could have gone lower, and will try to do that next time.  Dropping down to 7.5 definitely gave me more traction.  A couple of fat tires had 5 PSI.  I hear Steve say that he had 28 PSI in his 26″ tire. I think he was the only person who crashed the biggest downhill , and he riding in back, not up front, as is usual for him.

I think that four of us have 45N tires for this winter season.  I bought mine at Bath Cycle, who told me that they had 30 sets left as of two weeks ago.  They are pricey , but Lord, do they hold on the sheer ice sections, and what price is reasonable in order for me to avoid a broken hip?

Since the ride, I have viewed a great Youtube video of by John Anders riding in nearby Thomaston (Maine)  this past week.  I think the rider is his wife Tonya.  Thanks John, for another excellent vicarious ride on  the snow.

The WordPress.com stats helper monkeys prepared a 2013 annual report for this blog.

I appreciate all the contacts with my readers.  Even though I was not able to blog very often while I was off on my 5 month hike of the Continental Divide Trail, LOTS of people connected with me in 2013.  I pledge to try and bring my readers more interesting stuff .  Stay tuned!

The concert hall at the Sydney Opera House holds 2,700 people. This blog was viewed about 33,000 times in 2013. If it were a concert at Sydney Opera House, it would take about 12 sold-out performances for that many people to see it.

In Maine,  the past week has recorded the coldest temperatures in the past three years , where even on the coast, I’ve seen reports of -20 F.  Add wind chill and one ice and two snow storms and its positively wild and beautiful out.

The crazy cold have not stopped The Bubbas, who have kept up the tradition of mountain biking throughout the year, as they have done for the past two decades or so.  We rode twice this week, including New year’s morning.  It’s hard to believe that people not only look forward to riding on ice and snow, but that they do it.

I have a few tricks I use to keep myself warm when the temps hover in the single numbers, and they did during the day this week.

I wear electric socks, powered by D -cell batteries.  I switch to  platform pedals instead of clip-ins, and wear super-insulated LL Bean boots.  Layers of wool work, under windproof Patagonia tights on the bottom and a North Face fleece jacket on top-  but not too thick with the layering, as you do generate heat when the pedals start cranking.

My hands don’t take the cold well.  I have solved that problem by purchasing a pair of lime-green high-res Pogies from Stellar Bags, handmade in Minnesota, land of ice.

The cordura covers are lined with thick fleece, allowing me to stay warm with a lighter pair of gloves. I have fresh pair of chemical hand warmers in my Camelback that I have put inside the pogies if my hands do get cold.

A hood on my Patagonia wool 3 base layer that comes up under my helmet keeps my head warm, with a big silk cowboy scarf  covering my lower face.  Ski goggles brighten up the contrast with all the snow and keep my upper face warm.

Here are some pics of the two rides:

Looking forward to heading back to Warren, Maine tomorrow for another go at the fresh tracks.  Thanks go out to the snowmobilers  who pack the track for us!

“Therefore, I understood the importance of designing light weight equipment.” The result is a grill that weighs just over half-a-pound..”

via An Ex-Soldier Designs an Ingenious, Badass Grill for Camping Out | Wired Design | Wired.com.