My most faithful blog reader, and hiking budddy Tenzing (AKA Clarkie) posted the question many are pondering today: “How can we keep up with Andy’s adventure now that you have left him?

My answer is that I am not sure. I will try and post any updates I get here on this blog, which automatically is set up to report to both my Twitter and Facebook accounts. There is also a website set up about Andy’s Ride that allows you to follow him, get more info about the Tour Divide, and make a pledge that will support the nonprofit Camden Rockport Animal Rescue League. Reader Bill Dickey forwarded a link to Andy’s Spot device which is currently tracking his progress.

I highly recommend that readers also watch the 2008 documentary Ride the Divide, an award-winning feature film about the world’s toughest mountain bike race, which traverses over 2700 miles along the Continental Divide in the Rocky Mountains.

The film weaves the story of three characters’ experiences with immense mountain beauty and small-town culture as they attempt to pedal from Banff, Canada to a small, dusty crossing on the Mexican border. Appleton Ridge’s own Stephen Gleasner completed the 2008 race and appears in the massed start in the film. The film is now available through Netflix, either as a stream (instant), or DVD in the mail. I have a copy at home if any of my friends or neighbors want to watch it. Call Marcia.

I just received a call from Andy this morning. I am relieved that he did call me, and will be able to in the future. I made sure to program my number in his contacts list on his cell phone, as he claims all the ones he put in there were erased.

Andy’s already altered his plan. Mike won’t be driving Andy to Rooseville. Instead, Andy will be packing up today and riding his fully-loaded bike those 60 miles, on an asphalt road, up to the Canada border. He’s restless, and is compelled to ride, as he has done almost daily for the past several years. It’s in his blood . He plans to either get a motel room, or camp at the end of the ride to Rooseville. I hope he takes the motel room, as he’s never done this on his own in the thirty years that I have know him, but should do OK. He will have to, sooner or later.

Motel arrangements by phone, and subsequent motels stays are a salvation to long-distance endurance athletes, at least they are for me, generally on a weekly basis. You use their land lines to connect, call manufactures about gear failures, fix or stitch up broken or torn items, connect with family, wash your clothes, repack food you buy in town, and generally hole up and lick your wounds, check maps, and prepare for what’s next. It can be scary, and I know what it is to be homesick, even as a grown man. Andy claims this was his original plan, and he’s one to stick to initial decisions. For example, I couldn’t convince him to change his clock to Mountain time for the duration of the trip ( a two hour change in time from Maine). So his clock will be two hours skewed from any other clock in the “real world” out there. He’s holding onto Maine time.

I’m hoping Andy will check in with me, as he does with his wife Judie, but phone contact will get tricky in Canada. Andy’s on a limited Verizon plan, where once you cross into Canada, exorbitant, insane, roaming charges kick in. I understand that if you call Verizon and let them know you are entering into Canada, and refrain from data usage ( texts, web access), for about $20 extra bucks you can use your cell phone, but I don’t thing Andy knows that, or even if he did, would have the patience to endure the rather lengthy and mostly unsatisfying customer services exchanges that seem to be the norm with them. When I was in Vancouver for three days in 2010, staying with Dusty at the end of my Pacific Crest Trail thru-hike, I used my cell phone sparingly, and was shocked beyond belief when I got home and opened the monthly bill to see that I was assessed an additional $690 in international roaming charges charges. So I advised him not to use that phone from tomorrow, or even today until he gets out of Canada, which may mean a couple of weeks until he returns into the US after the June 8 start of the Tour Divide.

In the meantime, he just bought a phone card, which will allow him to make calls on a land line at a reasonable rate. Sounds easy, but in reality it is not. Land lines are only in private homes and businesses, and they are in motels, and pay phones are a rare breed these days. The problem is Andy’s not used it yet, and there are things like an international codes for the US that has to be entered as part of the dialing sequence. Sometimes riding one’s bike, or hiking is the easiest part of these extended trips. I know it is true for me. I generally am terribly stressed out and get into all sorts of trouble when I go into a town after a week of hiking- not police trouble ( that’s another story) but losing-stuff trouble, like clothing, glasses, wallet, Passport, or debit cards, which I am embarrassed to say has happened to me. I can’t even think clearly enough to buy groceries in a big store and once even begged my hiking buddy General Lee to let me follow him and just buy what he bought.

You will be able to follow Andy’s progress on a daily basis after the race start on June 8 by going to the Leaderboard on the Tour Divide web site. For a taste of what he is facing in the next few days, go to the Leaderboard, then look on the right pane, and select Map Layers . Then check Snow Depths, and view the purple sections are still reporting snow on the route. I enlarged the Canad portion of the map and this is what Andy will encounter on his ride up to Banff. Looks pretty purple up there to me.

Whether there will be much melting of these sections between now and after the start on June 8th is anyone’s guess, but after the snow melts there will likely be mud instead, which may not be much better .

Newspapers should also be covering portions of the ride. Just this morning, while eating breakfast in the Montana Cup I read in the Bozeman Chronicle that there is a 152,000 lightning-sparked wildfire burning in the Gila National Forest. More than 1,100 firefighters and nine helicopters are fighting it’s expansion. It is 0% contained, despite the millions of dollars that are being thrown at the fire in daily services. Although this year has a close to record low snow pack on the high mountains, persistent droughts and a “record breaking dry air mass” are fueling the fire. I don’t have a good map with me here, but I suspect that the proximity of the fire to both Silver City and Pie Town will force evacuations and possible closures in the area. Who knows what will happen by the time Andy reaches the area toward then end of his ride, but this is definitely not good. Thunderstorm season is upon us in the southern portion of the CDT, and more fires are likely, triggered by lightning. It is hard for easterners to conceive of this, but these wildfires are common in the windy, dry, desert areas. This particular fire is one that may break all records for that area of New Mexico, and soon.

Hope for rain on Andy’s parade? Sheesh! We may have to, but first there’s that snow ahead of him…… 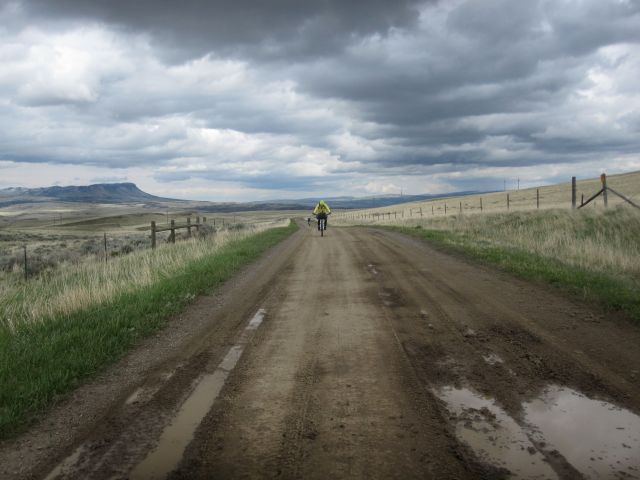