I first learned about this particular hike this spring, when the following mini-article appeared in Outside magazine:
“If Canada’s Atlantic Provinces are the new New England, then the Fundy Footpath is the new (and abbreviated) Appalachian Trail. The 14-year-old, 24-mile wilderness route traverses one of North America’s last undeveloped stretches of Atlantic coastline, following the Bay of Fundy north of Saint John from the Big Salmon River to Fundy National Park. The bay is best known for having the world’s highest tides—up to 48 feet—so a chart is required reading on this five-day trek. After hugging the cobbly expanses of Long and Seely beaches, the trail climbs 1,000-foot coastal bluffs, descends ravines, and crosses the Goose River. At Little Salmon River, take a four-hour side hike through Eye of the Needle, a narrow canyon enclosed by 200-foot cliffs, to the 300-foot cascade of Walton Glen Falls. There are eight campsites en route, but most of the trail’s hikers sleep on the beaches, above the tide line. Trail maps and free permits are available at the Fundy Trail Interpretive Centre (fundytrailparkway.com), at Big Salmon River, a 45-minute drive north from Saint John. River Valley Adventures (rivervalleyadventures.com) will shuttle your car from Fundy National Park back to the Big Salmon for $150.”

Then a web search for trip reports found Dom Caron’s words, which leapt out at me, “Get set for a bumpy ride. I have hiked a lot of places, like Georgia, North Carolina, Tennessee, Virginia, and  Maine and this is by far the most up and downs I have yet to encounter in a trail.”
Next was my  realization that this trail was only 4 and one-half  hours away from my home.  Right then I knew that I would be hiking it, sooner than later.
After checking out the info on the website, I called  866-386-3987 and ordered the Fundy Footpath Map Kits and Emergency Maps with GPS co-ordinates.   The price of the maps was $20.00 (taxes & shipping included), which included a contribution towards aiding the maintenance costs for the volunteers.

Getting the whole deal going was like a slow click with destiny.  Little did I know that a major hurdle would clear by a happenchance meeting, which occurred when I was hiking the Appalachian Trail in Maine.  On Oct.4 this month,  a man who goes by the trail name of Xenon walked in for the night at the Horseshoe Canyon lean-to.   When I heard that he was from Saint John , New Brunswick, I told him that I was planning to do the Fundy Footpath near there on Columbus Day weekend.  Xenon replied that he had already done the section, several times, and he was more than willing to try and help us out and left me his address and phone number.  It had been difficult for me to find people who have done the whole 26 miles, and I  still had lingering , puzzling questions about spotting cars, and negotiating tidal crossings of rivers and streams that can only be forded at low tide, due to the 40 foot tides .

This first day of our trip, I left our house in the company of Bad Influence, a veteran for two long distance stints on the AT, who has now become a good friend, after we have camped together this winter, and spent time with each other in various places in New England.  We motored north to Milford, Maine where we picked up Rangoon, legendary for his climbing abilities, which allowed him to traverse the whole 26 miles of  New Hampshire’s Presidential Range in one day on his 2007 AT thru hike.
Then it was  Down East for three and a half hours, passing efficiently  through customs at Milltown, near Saint Stephen, New Brunswick.
We reached Xenon’s house around noontime, where he and his wife Nancy had soup and sandwiches waiting for us.  Canadian hospitality has always shown itself to me as a true class act.
In no time, we were all in my Caravan, and headed the 1 hour drive through St. Martins and further to the  Big Salmon River Interpretive Center, where the Fundy Footpath started.  The descent down to the bay’s edge was so steep that my front brakes were smoking up a cloud when we exited the van.  Nancy remained to explore a bit before she drove my vehicle back to St. John.  She was to pick us up in three days at the other end at  the western edge of Fundy National Park.

We  walked across the suspension bridge which immediately brought us into a seaside wilderness, the likes of which I have never experienced before. 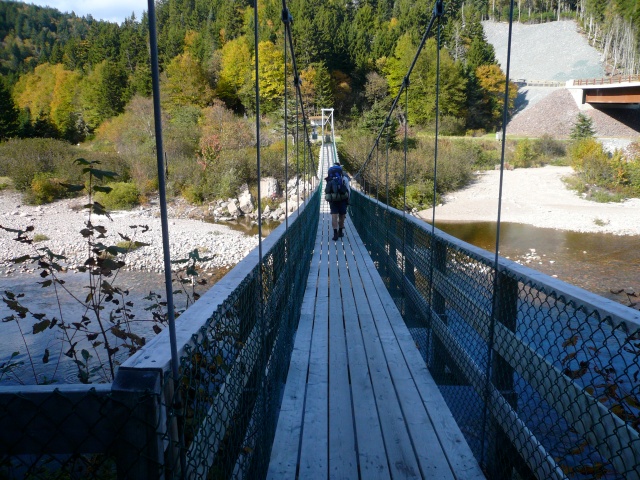 The Fundy Footpath itself is a 24 mile long  trail that requires an additional 5 mile trail walk to reach a roadway at the eastern end at Fundy National Park.  We encountered high cliffs, spectacular views and relative solitude, as we encountered only  four other people over the three days we spent on the trail. 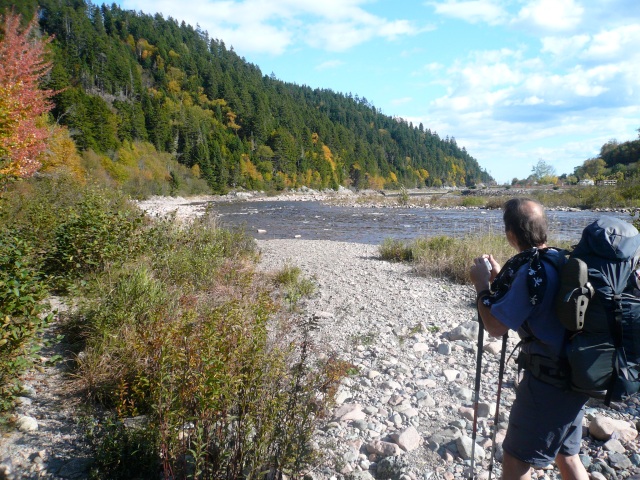 The literature recommends  four or five days to complete the walk, and that, “A hasty trip can be done in 3 or 4 days for the fit and experienced hiker”. 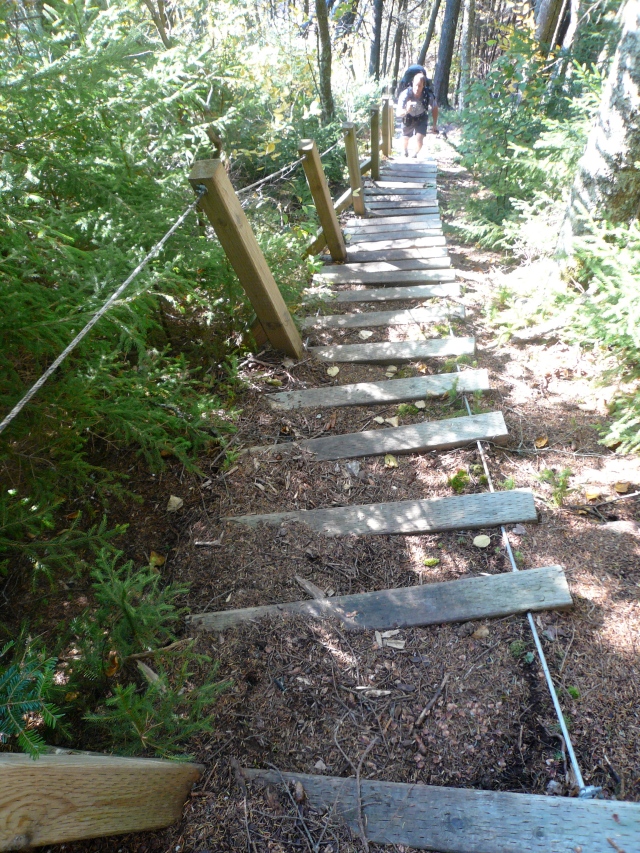 The Footpath is part of the Acadian forest region, home to more than 30 species of trees, 45 species of mammals and 285 species of birds.  The walk and the camping is, at least for now, free of charge.

We were delighted to encounter a very cushy footpath, but often it was cut into a steep side slope with loose lower edge.  Not many have walked here before us. There is nothing like the deep wear that characterizes the AT experience.  Despite the relatively virgin path, there is a feeling of being surrounded by ancient history as we moved through the area, where we encountered million year old rocks and aged trees that were sometimes between one and two hundred years old.  The fragrance of the bay and the forest intermingled into a heady mix.
Another companion on the walk was the constant sound of crashing surf, sometimes with multiple shore/wave sounds occurring simultaneously.

We were almost giddy with our enjoyment of the first afternoon of hiking.

Some of the first day’s walk involved traveling on sand , pebbles, muck, and smooth beach stones of all sizes and colors .

We spent our first night camped along the shore of Seeley Beach,  5 miles from Big Salmon.

All of our camp sites were on the shores of the Bay of Fundy, with the moon close to  full, shimmering on the bay,  with the faint  lights of far off Nova Scotia  in the distance.
That first evening was made especially memorable due to Xenon’s contribution of  individual marinated steaks, and precooked, buttered baked potatoes.  We roasted the meat over an open fire , and reheated the foil wrapped potatoes in the coals.  If the meat was too rare, or needed reheating, onto the fire it  went.  I cracked open some tequila, disguised as water in my recycled plastic soda bottle.  A  home made Whoopie pie topped off our first meal.
All this and we were only on day one, no it was actually day half-one, part of the afternoon.  The weather was clear and reasonably cool, with ditto forecasts right through the weekend.
This was gonna be good!