Karen dropped off Auntie Mame, Certain and me at 8:30 this morning.  Mame put us  to our paces as she wasted no time in fast stepping the first two miles up to the start of Holly Brook.  This first run of the day was a gentle uphill of almost 6 miles through hardwood forest, then spruce and fir, to the Pleasant Pond Lean-to .  Eventually the rain started up, and never really left.  There were positive features to walking in the rain today.  First, we were all prepared.  Hey, I even put on my rain pants and rain jacket. Second, it was pretty warm out, so today we had warm rain, which is much better than even a low 50’s degree cold rain.
At 10:45 AM  I was sitting at the Pleasant Pond shelter with Mame and Certain where we found not just the 2008, but also the 2007 shelter registers.  I located my 2007 entry, surprised to see I was here at the exact same time as last year, 10:45 AM, but on Sept. 3.   It was a kick to read all the familiar names written in there:  Blue Sky Georgia Barbeque, Terrapin Flyer, Jeb, Lifetraveler ( “Life is good”). Couch ( rant about Alpine Strider), Tom B, Castinets, Thunder, Mike, Boo Boo, Rizzo. Unbelievable.
We snacked down before we started squishing back along the Trail.
Next we faced an immediate 1,000 foot elevation gain that took up the whole length of mile 6.  This piece was time consuming, as the rock ledges were smooth here, and wet with lichens of all textures and colors, the footpath tilting this way and that. 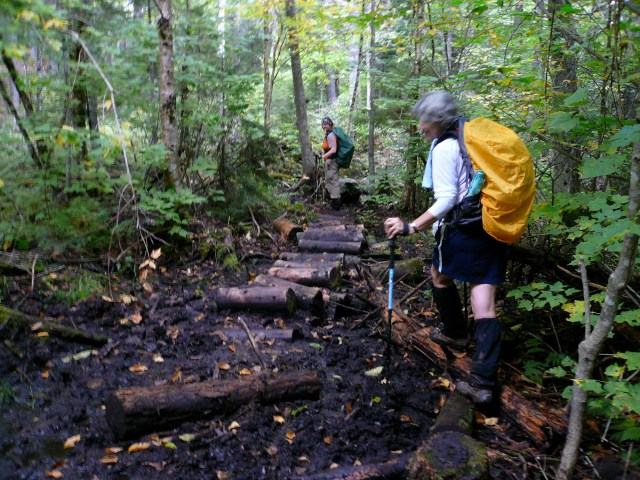 We dealt successfully with the slipperiness of the smooth rocks, which appeared like a huge pod of black whales, their mottled backs backs exposed to the air, moving steadily upstream all the way to the top of Pleasant Pond  Mountain.
We were doing the Careful Foot Placement Boogie all the way up and all the way down the other side. The wind really whipped the rain around at the summit.

Walking wet for the rest of the day,  we eventually reached the Moxie Pond Road, where Karen was parked and ready for a return to Bingham for the night.  I felt wet but good wet,  and decided to camp out, so I said my good byes and moved on another three miles to the Bald Mountain Brook lean to.  I can eat in restaurants anytime, and I had just enjoyed  last night with the trio in Bingham.  I was all set to stay out. The Trail only gained 500 feet over the three miles, which I managed to crank out in just over an hour.
After I reached the shelter, I went about the routine of settling in for the night.  I spent a good deal of time working up wet wood, but eventually succeeded in starting a decent cooking fire in my home made stove.  Tonight I feasted on dehydrated Chicken Curry that was super tasty and satisfying.  This dehydrating thing is the way to go, but it does take time at home for the preparation.
When I arrived at the lean to, there was just one south bounder doing a long section staying here, a young guy, out of college.  He had already picked up a good deal of info from his walk starting at Katahdin, but curiously, had no idea what I was talking about when I asked him what he thought of the spring at Potawadjo shelter in the Wilderness.  It is thought by many to be the best spring on the whole AT, a huge pool of cold clear clean flowing water.  It is one of my top 10  places on the AT and he didn’t even take the time to turn his head and check it out!
Three thru-hikers came in at the end of the day.  Initially, they were stand-offish, but I slowly wore them down and that they began to talk to me.  One of the ladies  apparently didn’t mind being soaked, “ I hope it rains to keep us cool.”   The middle aged fellow’s leg was really swollen from the knee to the ankle. I told him I thought he was experiencing edema, which needed to be checked out by a doctor.
I had the same problem last year in Massachusetts and had to deal with it, and fortunately it subsided.   Edema of the legs is difficult to treat. Diuretic medications are generally not effective, and the usual prescription is  to elevate the legs periodically during the day, and to avail the use of compressive devices. It is not the sort of treatment protocol that is exactly compatible with trying to whip through the rest of Maine at 20 miles a day.  I encouraged him to elevate his leg for the night, which he did,  and the swelling  was much reduced in the morning.
There was much discussion about how much money would be needed for the rest of their trip.  I advised the trio that Shaw’s didn’t take credit cards.  They said they’d go to the post office for cash.  I told them not to count on it, as Monson is a tiny town, and enough thru-hikers try to work the same deal  (to get cash from the PO) so the P.O. usually runs out of extra cash. It is sort of iffy.   They then countered with that they’d  just find an ATM in town. Except there is no ATM in Monson, which is desperately trying to just hang on as a service town.  I told them they just passed the last ATM machine at Northern Outdoors, where they just visited and could have cashed up.  They were going to solve that problem with a stay at the Lakeshore House, which does take credit cards, gives back cash, but charges more for everything than Shaw’s.  When I told them they should do that,  because Baxter charges thru-hikers for camping and does not take credit cards either, one of them said they’d just stealth though.  The discussion kept slanting in this disagreeable direction, including one of the group even insisting that there must be a store inside Baxter to buy camp supplies and food, like ice cream.  “We’ve been to the Shenandoah and the Great Smoky  National Parks and they had stores! What’s so special about Baxter State Park?”  At this point I didn’t volley back any more data, like, no radios, no motorcycles, no electricity, no RV’s, no playing musical instruments, plus even more no’s on the long list.  With the attitude they were sporting, they may not even realize what’s so special about Baxter State Park anyhow.
Then the college guy and I were talking a bit as we were waiting to got to sleep when the hobbled hiker said, “Would you guys please stop talking!  I am trying to get to sleep.”  I looked at my watch and thought his demand/request was a little out of order, as it was just 7:23 PM.  I didn’t want to start a fuss. After all,  the guy had just said that he  downed another  Percoset, so I rationalized he was not in his right mind.
These pissy mood things sometimes happen, even in lean-to’s in the Great State of Maine  where you have the privilege of being surrounded by rain, wind, and billions of trees.