Our second day on the road started out just the way I like it: cold, a bit cloudy and with no mosquitos to speak of. I was up first at 5:30 AM. We took our time packing up. I heated up water for my coffee and ate a “petite dejeuner” of some leftovers from my MRE from yesterday: crackers, peanut butter and raisins.

Our first adventure of the day was to head up to Moncton, where Steve had learned there was a BMW motorcycle dealer who might be able to assist him in solving his lack of front brake problem. Steve had directions from the woman who checked us in at the gate of the campground.

It took about an hour to get there. We rambled around town a bit, after getting some really bad directions from a wrecker driver at a stoplight. Two electrical workers at a stoplight put us right and we eventually reached the Atlantic Motoplex, founded under the name Atlantic Yamaha some 15 years ago with a transition to the name Atlantic Cycle for a few years, then back to Atlantic Yamaha for 6 years. With the addition of BMW Motorcycles, and Ducati motorcycles (exclusive for Atlantic Canada), the final name change has been to Atlantic Motoplex.

It was the biggest motorcycle shop I had ever seen, inside a brand new cavernous room the size of a city block. There were hundreds of motorcycles on display along with an acreage of clothing and accessories.
In the corner was a BMW sign, and I knew it was not good when Steve was still standing there, waiting, some 10 minutes after I wandered through the shop and checked in with him. A really young guy was manning the desk, alone, and he talked to Steve briefly, very briefly. We were soon walking out. Done .
“ They don’t have any slots to take me in. Next opening is in two weeks. No parts.”
The only hopeful news was that , while they wouldn’t even send out a mechanic or let us talk to one, we were told that what Steve had jury rigged is just fine, and that he could function on a single caliper up front. Steve was given a rubber wedge ( free) to jam in between the nonfunctional brake pads. Bye! Thanks, guys.
Yet another example where bigger is not better.

We still had not eaten any real breakfast, and were unable to locate a diner on the two mile access road back to the TransCanada Highway , Rt. 2. That had to wait until 11 AM . We were practically in Nova Scotia where we found an excellent restaurant just before heading into Amherst.
Today morphed into another hot humid one, and once into Nova Scotia, we picked up Route 6 out of Amherst, a secondary coastal route that follows the north shore until it dumped us back into the TransCanada Wighway in Pictou.
I struggled with keeping up a decent attitude with the now 90 degree , record-breaking heat. We gassed up , I drank a big bottle of Gatoraide, bought a bunch of gum and we were again on our way. Gas in Canada is sold by the litre, here for $1. 50 , or approximately $6 a gallon.

No sooner than we hit the open road, we ran into trouble. There was a massive road construction detail smack dab ahead. They sure do things differently in Canada. We had to sit on the broiling hot tarmac for a full half hour before we are allowed to proceed up the way. Of course we didn’t initially know that, so we found ourselves sitting on the bikes, at the ready if the long line ahead of us started to move. I eventually took off my gloves, helmet, and unzipped my protective jacket. I was still miserable in the heat and humidity.

Eventually we rolled on, but for just 1 mile when we were detoured off the TransCanada for more adventures in misery. I asked the flagman what was going on this time. He told me that there was “ a safety emergency” ahead. A tanker truck that was carrying propane had rolled off the TranCanada, but he assured me that we were going to be back on in “ a couple of miles” . The couple turned into 8 miles, and the huge amount of normal traffic, including a large percentage of tractor trailers, was now forced to slowly wind its way over a very narrow road with no shoulders. There was no way the trailers could fit on the asphalt, so they were occasionally churning up the gravel on the sides of the road, throwing up god-awful clouds of dust, grit, and sometimes small stones. As motorcyclists , we were forced to take one of two despicable alternatives; either to close the helmet face shields and squint through the dusty plastic and ride in the oppressive heat, or leave the shields up and cough up dust.

It was at this point in the trip that I seriously began to question my whole relationship with this motorcycle touring thing. What made it worse is when I glanced over at the side of the road and saw a pristine stream moving through the woods, bubbling over some rocks. I began fantasizing about walking in the wilderness, and a whole negative cascade of thoughts started flowing.
“Why am I doing this? I could have taken this week and gone backpacking. If I was hot, I could just go for a swim! “
“Why are the three of us each riding a separate vehicle, each paying $25 every time we fill up? Maybe we should have taken a van, towed one motorcycle and taken turns riding it!!??”
“ I just want to be hiking, and sleeping in the shade under a tree!”

Eventually were routed back onto the the TransCanada, and my attitude was re-adjusted. The afternoon moved along, and temperatures cooled as we rolled over the Canso Causeway onto Cape Breton as we approached our final destination of Baddeck.

We pulled into the Adventures East Campground off Route 105. It was primarily an RV facility, but we did have our choice of any of the 10 unserviced tent sites. They also had modern heated washrooms, picnic tables with fire rings on all sites, free (hot) showers, and best of a swimming pool! It was hot again, and our first priority after snagging a shaded tent site was to lay in the pool and get our body temperatures down.

We saw a luna moth on the door of the wash house. 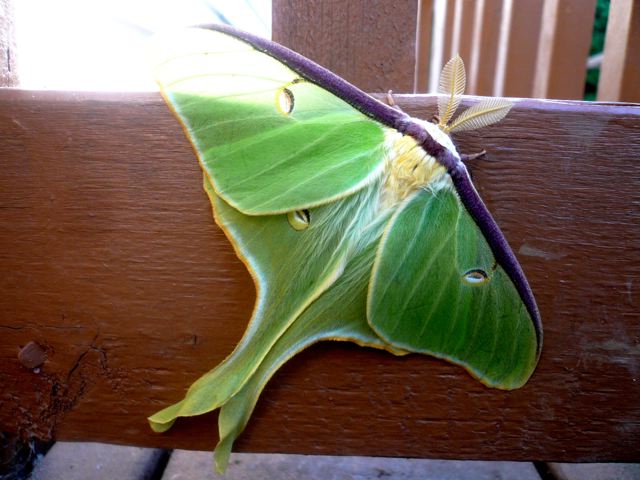 The place was a bit expensive as campgrounds go ($26.00 plus 13% tax), but we ended up staying there for three nights anyways, as the location was perfect for our purposes, and they did have that pool.
The place was empty. Aside from one other night where there was a couple tenting, we were alone in the tent loop. The RV section was nearly empty as well. 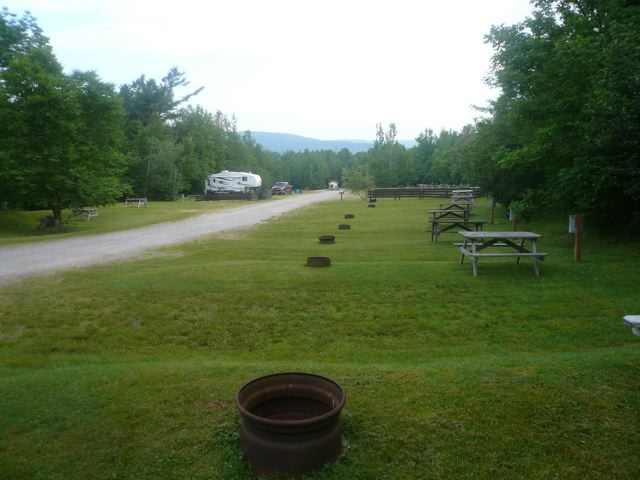 After the pool soak, I showered, and we went back to the site to cook up supper. Another MRE for me, but I did fire up the wood stove to boil water. After the water was hot, I added enough damp material that the fire produced a good smolder, which helped us in deal with the mosquitoes.