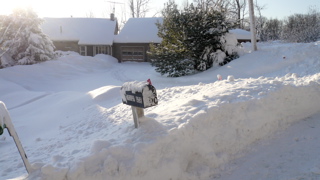 My romance with the outdoors continues. Last night, as part of our own private New Year’s Eve celebration, Marcia and I lay out on the couch and watched the AT classic video “Walking With Freedom” documentary that tracks the Lion King on his 2003 thru hike. Satisfying stuff, not too wild. Definitely a movie about another romantic, walking just to save his soul .

Tonight it is the real Jan. 1, and we sit here in the illuminated darkness on 8 PM on snowy winter’s night in Maine. Another 12 inches of snow predicted by daybreak. Don’t think we’ll be going too far tomorrow, unless we do a lot of shoveling between now and then. We get to wear our headlamps around our necks tonight, too, because the heaviness of this type of snow is probably going to break tree limbs ( big ones) , which tend to wipe out the power lines around here. We’ll be ready to see what is going on, these trusted light sources our secret allies. ( We did lose power!-Ed)
Marcia and I got to hike together today at just at the start of the storm. We both strapped on the snowshoes and slogged to the top of Moody Mountain. It is about a 600 foot elevation gain, and we were out there moving steadily for an hour and a half.  It is easy to be in the outdoors for us.  We just walk a bit down the road and then head on up, or down, one of the trails .

First,  we move through a pasture that rises high enough so that that at the top you can look back and see the great big Atlantic, our part called  Penobscot Bay. After that, we enter some recently cut woods , following a tractor path up over some fairly thick hardwoods , walking until that trail ends. So then we go on our own , up more steeply, following a narrow trail that I have established here over the past couple of years. We eventually reached the top, a long ridge that we cover in a half-mile before we reach the summit. It is now snowing so hard we can’t see squat for views.

I like walking in woods like this with snowshoes. You are forced to walk about half as fast as you can on solid ground. There are quite a few mini-slips that you deal with , and the whole process is not too far removed from another winter sport up here, ice skating. Walking gets much tougher when the elevation is steep, mostly because of the constant struggle with slipping backwards that you have to overcome in order to actually move higher up the slope. The best news is that it is much easier than regular walking on the descents , as the character of the deep snow allows you to take the opportunity to “ski” down the slopes on your snowshoes. I take the extra precaution of keeping my knees flexed a bit, just in case my body heads in a direction my knees know nothing about.
It is so hopeful , this year upcoming . My six months walk north along the spine of the seaboard set me straight. It keeps at me every day. Today was as fine a start to have one foot in the wilderness as there can be.